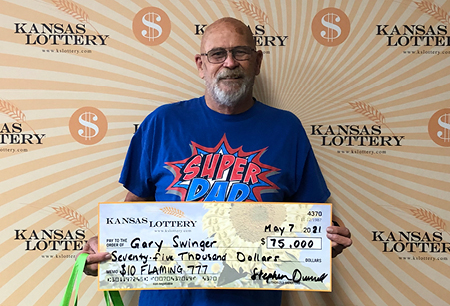 Right after his 66th birthday, Gary Swinger of Wichita decided to cash in a few tickets before heading to his medical appointment. As he was already having some luck on the $2 and $5 games in the “777” family of tickets, Swinger thought he’d try to turn the $10 he won on those into a much bigger prize. That simple exchange ended up being a late birthday surprise because he won the first $75,000 top prize in the Kansas Lottery’s brand new $10 Flaming 777 game!

“I didn’t want to bring any cash with me into the hospital, so I just decided to use up my $10 winnings on the $10 ticket. I scratched it right before I went in to get my heart checked out and saw that my ticket won $75,000! Of course, my heart rate was still pretty high when they ran their tests on me,” Swinger joked.

The winner said that when he told his wife, who was in the vehicle with him, she told him to stop lying to her. “She really thought I was joking with her, but believed me when she saw it herself!”

Swinger and the rest of his family is grateful for the win, and he plans to use the winnings to pay off the family’s vehicle and upgrade their home’s siding and windows.

The winning ticket was sold at Jump Start 1 at 1535 E Pawnee in Wichita. There are still three top prizes in the $10 Flaming 777 game, plus thousands in other prizes!