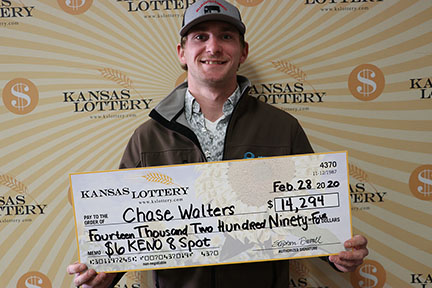 Chase Walters of Fulton picked up a multi-draw Keno ticket from the convenience store, and left without watching all of his drawings. When he got home, he called the store and asked what the winning numbers were, and that’s how he found out he won $14,294 on an 8-Spot!

“I play the Kansas Lottery just about every week, and I’ve never won anything like this,” said Walters. “I’m still kind of in shock! It’s starting to sink in now that I’m in Topeka, but I don’t think it will fully set in until I get the winnings.”

After hearing the good news about his ticket, Walters went back to the store to have the ticket scanned and verified. “Once it said to ‘sign ticket and take to clerk’ that’s when I knew it was real. Everyone in the store was so excited!” he said.

The next day, Walters went to work and asked his boss if he could have Friday off to come to Topeka. “I showed him the ticket because nobody believed me at first,” Walters said with a smile. “But when they found out it was the real deal, they let me take Friday off, so here I am!”

Walters said he doesn’t have any short-term plans for the winnings, but he does have an end goal in mind. “For now I’m just going to save it. I’d like to start my own farm one day and get some cattle, so this could go towards that in the future.”

The winning ticket was sold at D’s Mini Mart IV at 21356 KS-239 in Prescott. Keno is a daily draw game, with drawings held every four minutes!