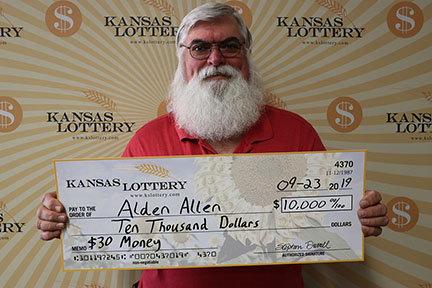 Sporting his long white beard and jolly attitude, a man known to many in Girard as Santa Claus was the one receiving a gift on Monday.

“I couldn’t believe it. It was so exciting,” said Alden Allen.

Allen has played Santa Claus for the past 15 years at local events and celebrations, and while he enjoys bringing happiness to others, he couldn’t conceal his excitement after winning $10,000 on the Kansas Lottery’s new $30 Money instant scratch ticket.

“I don’t really play the $30 tickets. This was only the fourth one I’ve ever bought,” Allen explained. “The first ticket I bought paid out about $40 so I used the winnings to buy two more, and one of them was a $10,000 winner! I’m glad I decided to try the new ticket!”

Allen described the exciting moments as he scratched off the winning ticket.

“I kept revealing a 10X symbol over and over again. I knew it was going to be a big winner, but I didn’t realize just how much I had won until the end,” Allen went on to say, “It was so exciting, every box I scratched was a winner. It was an awesome experience.”

Allen may be new to playing the $30 instant tickets, but he’s no stranger to the Kansas Lottery. He will be joining the Lottery at the Kansas Speedway on October 5th as one of the PlayOn NASCAR Driving Experience promotion winners!

As for his winnings, Allen explained although Christmas is 93 days away, he plans on using the money for non-Santa related home upgrades as opposed to a new sleigh for the winter.

“We’re planning on getting a new dishwasher and refrigerator for the house,” Allen said. “After that, we’ll just use the rest for some fun money!”