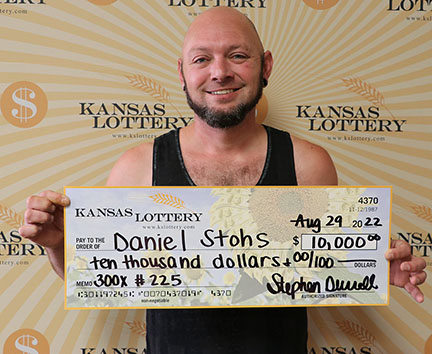 They say lightning doesn’t strike the same place twice, but for Dan Stohs of Lawrence, his consistent purchasing strategy has paid off with two big wins in 2022. Earlier this year, he claimed a $25,000 top prize win on the $5 Elvis game. Now, he’s continuing his hot streak with a $10,000 win on the $30 300X instant ticket!

“You can’t win if you don’t play, and I play fairly consistently,” Stohs said. “That being said, I certainly haven’t won big prizes like this until now. It’s been a crazy experience for sure!”

Stohs says that he plays the Kansas Lottery regularly, even purchasing his tickets from the same handful of retailers around Lawrence. “I have a pattern and I like to stick to it,” Stohs added.

Stohs didn’t purchase the big winning ticket immediately. He was playing and cashing in smaller winners, when he decided to try one big ticket before leaving.

“I had some winnings, not a huge amount, but I decided I would do something I rarely do, which is play a big $30 ticket,” Stohs said. “It was lucky ticket #7, so I went for it. Just bought the one ticket, and it was the winner.”

When asked what advice he would give to people wishing to have similar luck, Stohs was quick to reply.

“You have to play to win! Just be smart with when you play, and be consistent,” Stohs said. “It’s a lot of a fun. And who knows? You may end up winning!”