Driver Makes Long Haul Back to Topeka to Claim $22,000 Prize 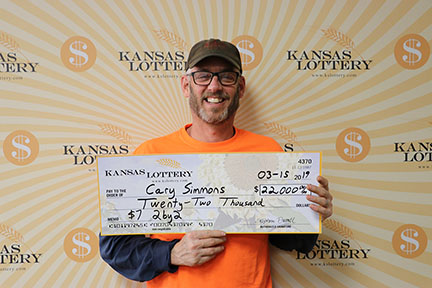 Cary Simmons of Grain Valley, Missouri was working in Kansas last December when he bought a $7 2by2 ticket on his way home. A few weeks later he checked his ticket and realized he had won big!

“I bought the ticket in the first week of December and put it in my wallet and forgot to check it,” explained Simmons. “When I remembered, I got on the Kansas Lottery website to check it and that’s when I realized what I had won. I couldn’t believe it!”

Simmons added it took more than three months to claim the ticket because his work kept him out of the area.

“I didn’t know what to do with the ticket, so I signed it and gave it to a friend who put it in their safe for me. I didn’t have anywhere to keep it,” Simmons said. “I finally got a job that would be bringing me closer to Topeka this week, so I grabbed the ticket and made the drive over.”

Simmons said while he doesn’t know what he’ll do with the winnings just yet, he already has a couple of ideas.

“I just bought a car last week. The smart thing to do would be to pay off a big chunk of that with the winnings, so that’s probably what I’ll do.”