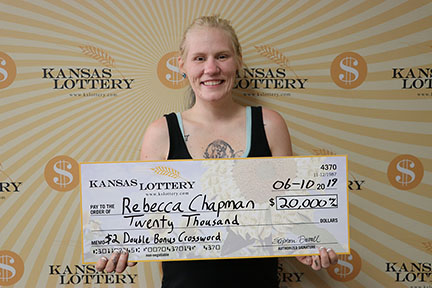 Smiling ear to ear, Rebecca Chapman could hardly contain her excitement after finding out it only takes one ticket to win big with the Kansas Lottery!

The Iola resident bought one $2 Double Bonus Crossword instant scratch ticket over the weekend and ended up winning $20,000!

“I was with my mom and a friend, and we were on the way to hang out at a friend’s house when we stopped at the gas station,” Chapman enthusiastically explained. “I only bought one ticket because I’m not the lucky one with crosswords, my mom usually is.”

Chapman says as she started scratching the ticket her heart started beating faster and faster as the latex from each square fell to the car floor. After counting 10 words, Chapman was in disbelief.

“I’ve misread tickets before so I had my mom double check it for me,” Chapman explained.  “When my mom also counted 10 words, that’s when I knew it was real and I started screaming!”

Chapman, who is expecting her third child, said she already has several ideas on how she’ll spend the money.

“I’m definitely going to give some to my grandmother. I have two daughters who I’ll start savings accounts for, and I’m expecting a third daughter in a few months as well, so this will help cover some medical bills.”

The winning ticket was sold at Casey’s General Store 1794 located on 712 East Madison Ave. in Iola. There are still 26 top prizes left in the $2 Double Bonus Crossword instant scratch game, as well as thousands in other cash prizes!