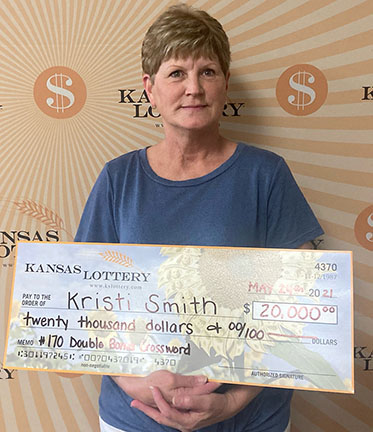 Kristi Smith of Topeka is an avid Kansas Lottery player. Her dedication has finally paid off with a $20,000 Double Bonus Crossword top prize!

The $2 Double Bonus Crossword game is consistently one of the most popular games in the Sunflower State. Smith, however, had taken a break from the Crossword tickets for several months.

“I felt like I had gone cold on the Crossword games, so I started playing the $3 Loteria and the $5 Hot 777 tickets instead,” Smith said. “I actually cashed in a winning $5 Hot 777 ticket, and decided to use the winnings to get my first Crossword tickets in probably three months!”

That decision would ultimately net Smith the big $20,000 top prize win, but she didn’t realize it until the next day!

“I put the tickets in my purse, drove home, then completely forgot about them,” Smith said with a laugh. “It wasn’t until the next morning that I realized I still had those tickets. I sat down and scratched them off, and that’s when I realized how much I had won!”

Smith shared that this is the second time someone in her family had won a big Kansas Lottery prize. Her sister, Kari, won $25,000 in the Kansas Lottery’s televised game show years ago!

“Hopefully this is the start of a new family tradition of winning with the Kansas Lottery. Maybe our mom can be next!” Smith said.

Smith says she isn’t sure what they’re going to do with all of the winnings right now, but she does have one big trip already planned out. “For as long as I can remember, I’ve wanted to go to Aruba,” said Smith. “Aside from that dream beach vacation, I figure we’ll put the rest in savings for now.”

The winning ticket was sold at Kwik Shop 781 at 4500 South Topeka Boulevard in Topeka. There is still one top prize left in game #170 $2 Double Bonus Crossword.