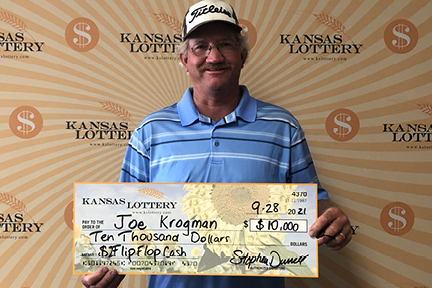 “At first she only gave me one to start with, but I asked her for another. It’s a good thing I did because it was the second ticket that had won $10,000!” Krogman shared. “I scratched it and was still a little sleepy-eyed, so I asked a buddy and the clerk if I was seeing it correctly, and they told me I was.”

“I even took a picture of the ticket and sent it to my sister. I told her ‘happy birthday to me!’” he added. With that, the news quickly spread across the small town, and Krogman’s wife even found out about the win before he made it home an hour later!

Krogman is unsure what he’ll spend the money on, but plans to keep it in savings for now. He does think, though, that the money will be handy when the couple travels to Las Vegas in the spring to visit their daughter.

The winning ticket was sold at CJ Express 1 at 1202 11th Rd. in Marysville. There is still one top prize remaining in the $2 Flip Flop Cash instant scratch game, plus thousands in other prizes!