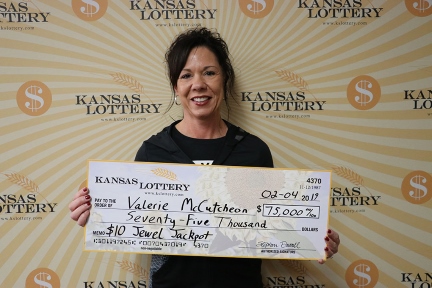 Valerie McCutcheon of Newton doesn't play scratch tickets that often, but the Kansas Lottery's sparkling $10 Jewel Jackpot ticket caught her attention while in line at the store. Her split-second decision paid off to the tune of $75,000!

"I had just seen a TV show about lottery winners, so the lottery was on my mind," said McCutcheon. "I was in line and I saw the sparkling ticket and decided to give it a shot. I only bought the one Jewel Jackpot ticket, and it was the big winner!"

McCutcheon didn't scratch the ticket off in the store; instead, she went home to see her daughter and new granddaughter. "I scratched it off at the kitchen table. When I realized what I won, I must have made a silly face because my daughter was laughing at me! When I showed her the ticket, we both got super excited. We didn't know what to do!"

"When my husband got home, he took the ticket to the store to check it and they confirmed it was a big winner," said McCutcheon. "It was Friday night, so we had to wait all weekend before coming to Topeka to claim it. It was nerve-wracking, but we made it through."

"We're planning on paying off my car and saving the rest of the winnings for now," McCutcheon said. "And I'm sure we'll spoil the granddaughter a little bit as well!"

The winning ticket was sold at Dillons 77 at 1410 S. Kansas in Newton. There are still two to prizes left in the $10 Jewel Jackpot instant scratch game as well as thousands of other cash prizes.