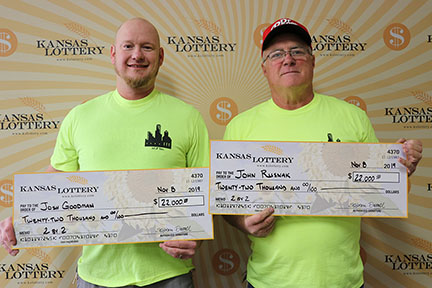 John Rusnak and Josh Goodman have been working together in Overland Park for several years. For the last five years, they’ve been playing 2by2 with the agreement that if one of them won, then they would split the prize. Their partnership has now paid off with a $22,000 prize!

Rusnak matched all four numbers in the November 6 drawing, Red 23 and 24 and White 06 and 09, on a free ticket won in a previous 2by2 drawing.

“We started playing the lottery together about five years ago, and we decided to focus on 2by2 because it only costs $1, it draws every night, and if we won on a Tuesday we could double our prize,” said Rusnak. “We’ve come close to matching all the numbers in the past, so it was pretty awesome to finally win a big one!”

According to Goodman, when he saw on the Kansas Lottery website that someone had won 2by2 in Northeast Kansas, he texted Rusnak to hurry and check their tickets.

“We got to work a little early, and sat in the break room checking our tickets,” Goodman said. “John started going through his stack, and when he found the winning combination, we started celebrating! Luckily no one else was in the building yet or they would have thought we were crazy.”

Goodman said he plans to use his winnings to pay for his daughter’s graduation party this year, and will save the rest. Rusnak, however, has less practical aspirations with his winnings.

“As you can tell by my hat, I’m a big fan of Dr. Pepper. I want to buy a Dr. Pepper vending machine,” Rusnak said with a smile. “I’m not joking! I’ve wanted one for a long time and now I think I can get one.”