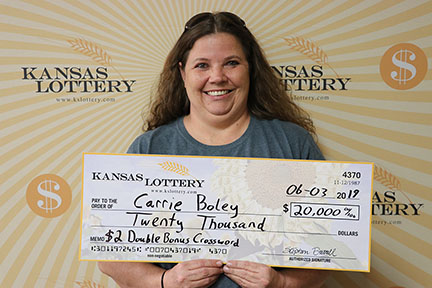 Carrie Boley received a $20,000 surprise thanks to the help from the sharp eyes of her family.

The Pratt resident said she bought six $2 Double Bonus Crossword tickets last week, but waited a few days to scratch the tickets off.

“After I scratched the winner, I was shaking with excitement and I showed my sister Jammie the ticket and told her it was a $500 win,” Boley enthusiastically explained.

However, once Boley’s sister looked at the ticket, she found Boley had miscounted the number of words on the ticket and believed it was actually worth $2,000, so they rushed to the convenience store to double check.

“When they scanned the ticket the clerk gave us the claim form and we got back in the car,” Boley explained.

But the story doesn’t stop there. Boley’s niece then asked to look at the winning ticket and discovered one letter on the ticket had been overlooked.

“My niece found an “H” that I hadn’t scratched off and told me that it made a tenth word, which meant the ticket was worth $20,000! I couldn’t believe it. I got so excited that I felt sick,” she explained.

Boley added she plans to use her winnings to pay off her new car.

“I just got a new car not that long ago. This will pay off the balance completely, with some left over to give my sister,” she said.

The winning ticket was sold at Kwik Shop 709 located at 116 South Washington Street in Pratt. The Kansas Lottery retailer isn’t a stranger to selling winning tickets. In 2018, the store sold three $2,000 winning $2 Double Bonus Crossword tickets within a six-week period.

There are still 27 $20,000 top prizes left in the $2 Double Bonus Crossword instant scratch game, as well as thousands in other cash prizes.