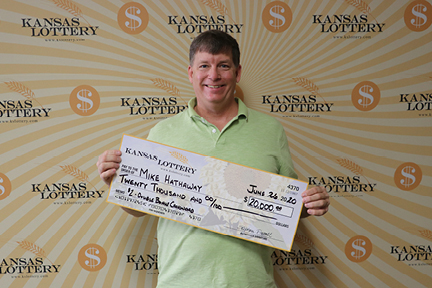 Mike Hathaway has consistently played the Kansas Lottery’s $2 Double Bonus Crossword for more than a decade. On his way home from a “long, hard day” of laying floors, he made his typical stop to purchase five Crossword scratch tickets and a candy bar. The Tonganoxie man waited to see if he had won on any of them until he got home, where he finally revealed a winning ticket worth $20,000!

“I kept on getting one word after another. When I saw four or five words completed, I thought that would be a nice small prize, but then I kept finding more!” he said. “I looked over at my wife in shock and told her we just won $20,000!”

This is not the first time Hathaway has won such a large prize. In 2007, he and 19 other players were invited to the Kansas Lottery’s 20-year anniversary party to scratch giant instant tickets. At the party, he also won $20,000!

“My luck has been amazing, and this win couldn’t have come at a better time,” he said. “With these trying times, I am going to hold on to the money as long as I can to keep up with bills and taxes for my small business.”

The winning ticket was sold at Casey’s General Store #3780 in Tonganoxie. There are still 13 $20,000 top prizes left in the $2 Double Bonus Crossword instant scratch game, as well as thousands in other prizes!