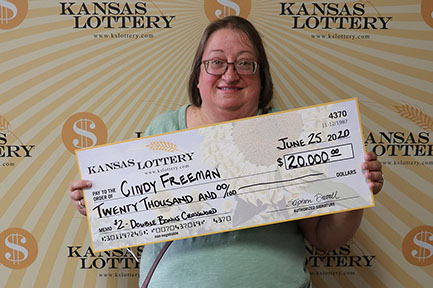 When someone wins $20,000, it is typically a cause for immediate celebration! However, the same day that Cindy Freeman of Topeka uncovered a $20,000 top prize in the Double Bonus Crossword game, the Kansas Lottery lobby closed to the public. Freeman would have to mail-in her prize, or wait until the Lottery reopened its doors.

The dedicated Kanas Lottery player decided she would wait it out to bring her ticket in personally, and three long months later, she’s finally claimed her big prize!

“I buy two tickets every work day on my lunch break,” said Freeman. “I scratched the tickets off in my car, and the second one was the big winner. At first I thought I had miscounted! I couldn’t believe that I had actually won $20,000!”

After showing the ticket to her family, they all agreed that it was worth $20,000, so Freeman hopped in the car and drove across town to the Kansas Lottery headquarters, only to find the doors locked!

“It was the first day that the lobby was closed to the public,” Freeman said with a laugh. “I didn’t know what to do! I read the sign that said I could mail it in, but that made me too nervous, so I just took it home and put it in a safe place, and it sat there for three months!”

When the Lottery announced it was taking appointments for claims again, Freeman was quick to sign up for a time to come in and claim her prize.

“It feels great to finally have come in to claim the ticket,” she added. “Now we can actually tell everyone that I won! We hadn’t told anybody yet, and that was hard to keep quiet!”

Freeman says they plan to use the money to pay off some medical bills and will put the rest into savings for now. “I’m not sure what our plans are just yet. We’re just happy to turn the ticket in!”

The winning ticket was sold at Murphy Express 8599 at 1531 SW Wanamaker Road in Topeka. There are still nine top prizes left in the $2 Double Bonus Crossword instant scratch game, as well as thousands in other cash prizes!