Where The Money Goes

Since the Kansas Lottery's start up in November 1987, through June 30, 2020, Lottery ticket sales 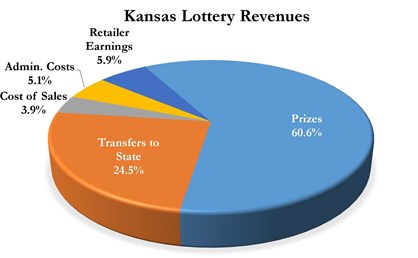 have produced nearly $1.9 billion in revenues transferred to the State of Kansas. In that same time period, nearly $3.6 billion worth of prizes have been paid to players, and retailers have earned more than $370 million in commissions. The Lottery's Fiscal Year 2020, which ended June 30, 2020, produced nearly $275 million in sales and more than $69.1 million transferred to the state.

The Kansas Lottery Act requires that a minimum of 45 percent of total sales be paid back to the players through the prize fund. In Fiscal Year 2020 (July 1, 2019 through June 30, 2020), the Kansas Lottery paid out 60.6 percent in prizes. Transfers to state programs were 24.5 percent of ticket sales; cost of sales was 3.9 percent, which includes vendor feeds for gaming systems and instant ticket printing; 5.9 percent was paid to Lottery retailers for commissions and bonuses; and 5.1 percent covered administrative expenses, including salaries, advertising, depreciation, professional services, and other administrative expenses.

How are Kansas Lottery Proceeds Distributed?

The State Gaming Revenues Fund (SGRF) is funded through monthly transfers from the Kansas Lottery. Transfers are made from the Gaming Fund to funds dedicated to economic development initiatives, prison construction and maintenance projects, local juvenile detention facilities, problem gambling assistance, and the State General Fund.

The first $50 million is divided by a formula which first transfers $80,000 to the Problem Gambling and Addictions Grant Fund. Then 85 percent of the balance is transferred to the Economic Development Initiatives Fund, 10 percent to the Correctional Institutions Building Fund, and 5 percent to the Juvenile Detention Facilities Fund. Any receipts in excess of $50 million must be transferred to the State General Fund.

Legislation passed by the 2003 Legislature authorizes net profits from Veterans Benefit Games to go directly to designated veterans programs.  Every penny of the money is used here in Kansas and goes to provide basic things for our Kansas military veterans.

All net profits received from the sale of Kansas Lottery Veterans Benefit Games are deposited into the state treasury and are then directed to three special funds:

Click to Watch video about the Veterans Enhanced Delivery Program.

Initially, Veterans Benefit Games were sold only from May through November each year.  A change in the legislation authorized the Lottery to sell the games year round, starting in May 2008.  Fiscal Year 2009 was the first year that included year round sales.

How does the Kansas Lottery transfer revenue from Veterans games?

Prior to FY 2019, net profits from the sale of Kansas Lottery Veterans games were transferred to the state treasury once a year on June 15. The transfer was made at the same time as the Lottery made its monthly transfer to the SGRF. From the state treasury, the Veterans Benefit funds were distributed directly to the designated programs, according to the percentages in the legislation.

Beginning in FY 2019, a fixed amount is transferred from Lottery to the Veterans Benefit Lottery Game Fund (VBLGF) once a year on July 15.  The transfer is made at the same time as the Lottery makes its monthly transfer to the SGRF. If calculated net profits from the designated games at the end of the fiscal year are more than the initial transfer, the additional net profits are transferred to the VBGLF.

How Much Money Has the Lottery Transferred from Veterans Games?

Since sales began in FY 2020, up to $8.0 million each fiscal year from the sale of lottery tickets through lottery ticket vending machines is transferred to the following funds within the Kansas Department for Aging and Disability Services:

How Much Money Has the Lottery Transferred from Lottery Ticket Vending Machine Sales?