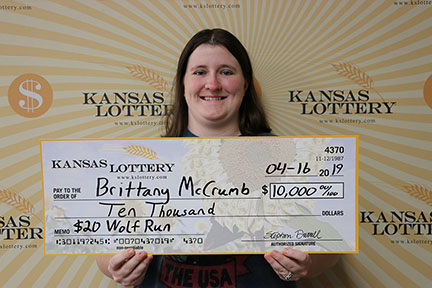 An Army veteran visiting Kansas from Florida struck luck when she won $10,000 playing a $20 Wolf Run instant scratch ticket while visiting her husband in Overland Park.

“I met my husband in the military and he’s from Overland Park, and that’s where he lives right now. I was visiting and we were out shopping and stopped at a gas station. That’s when we saw the Wolf Run ticket, which is my lucky slot game, so I knew I had to play it,” said  Brittany McCrumb.

McCrumb explained the excitement of winning hasn’t set in yet.

“The scratch tickets are $20, so I only got two at a time, and the second ticket was the big winner,” McCrumb said. “We were scratching them off in the car and couldn’t believe our eyes, so we took it back in and had the clerk check it for us. He was almost as excited as we were!”

McCrumb added she is planning on moving to the Sunflower State soon, so the winnings came at the perfect time.

“We’ll pay off some bills and put the rest into savings right now. We will probably be looking for a home in a few years, so the money will probably end up going towards a house,” McCrumb explained.