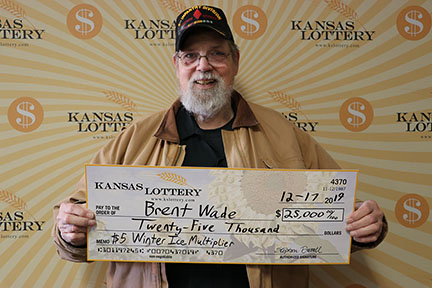 Brent Wade of Salina has been playing the Kansas Lottery ever since it started. That persistence paid off this week with a $25,000 win playing the $5 Winter Ice Multiplier instant scratch ticket!

Wade was going about his typical day when he decided to cash in some winning tickets at the store. Instead of cash, he used his winnings to get more scratch tickets.

“I bought a group of tickets, and it was the seventh ticket that was the big winner. I was standing at the end of the counter scratching them off, and all of a sudden there was the matching number with the ‘$25,000’ prize amount,” Wade said. “I thought I was seeing things, so I showed one of the workers and she confirmed it was a big winner! We all celebrated together for a minute before they reminded me to sign the back of the ticket.”

Wade has several ideas of what he’s going to do with his winnings. “I’m going to put some toward my car payments and get ahead of those. I’m also going to donate some to my church. Whatever is left over, I’ll probably just leave in the bank for now,” he said.

The winning ticket was purchased at Dillons 95 on 1235 East Cloud Street in Salina. There is still one top prize left in the $5 Winter Ice Multiplier instant scratch game, as well as thousands in other cash prizes.