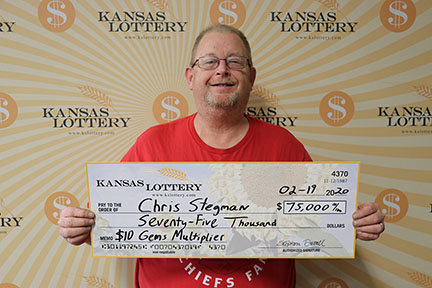 Chris Stegman of Hays knows first-hand how the Kansas Lottery can change someone’s life. In 2017, he won a $100,000 prize and was able to retire from his job and pay off debts. Three years later he’s back in Topeka with a $75,000 prize on the $10 Gems Multiplier Super Ticket!

“I have always joked with my friends that I was going to be the only guy they knew that had won the lottery twice,” said Stegman. “I hoped that would be true but I didn’t think I would get this lucky twice! I’m still kind of in shock.”

Stegman had stopped to grab some lunch and fill up his vehicle when he saw the new $10 Gems Multiplier Super Ticket, which is a large multi-game ticket. He said once he saw the game, he knew he had to play it.

“I only bought the one ticket. I took it back to the shop with my lunch, and that’s where I scratched it off,” Stegman said. “I was the only one around so no one got to hear me celebrating, but I was super excited! I called my wife and asked her to call and get me a room in Topeka, because I was going to make the drive that day!”

Stegman says they aren’t sure what they’re going to do with the winnings this time. “Last time I retired and paid off our debt. Now I don’t know what to do,” he said with a smile. “We have a vacation to Las Vegas coming up soon, so I’m sure we’ll go see some extra shows while we’re there. With much better seats than we originally planned!”

The winning ticket was sold at Southside Convenience at 703 Vine in Hays. There are still two top prizes left in the $10 Gems Multiplier Super Ticket, as well as thousands in other cash prizes.