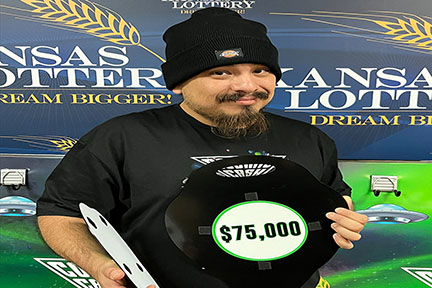 David Garza of Lawrence is feeling out of this world today after winning the $75,000 Grand Prize in the Cosmic Cash second-chance promotion at the Kansas Lottery headquarters in Topeka!

There were a total of 10 finalists from all across the Sunflower State. To win a spot in the grand finale event, players entered their non-winning $5 and $10 Cosmic Cash instant tickets into PlayOn®. A $5 ticket earned one entry in the drawing, and a $10 ticket earned two entries. The promotion had a total of 230,632 entries and ran from May through October of this year.

None of the finalists walked away empty handed, though! Each player was able to experience the thrill of the win! The complete list of winners and their prize amounts is as follows:

“I’m still in shock, honestly,” said David Garza, the grand prize winner. “I came here expecting to probably just win $10,000. I never win anything, so I certainly wasn’t expecting this!”

When asked if he had any plans for his winnings, Garza just laughed it off. “I still can’t believe that it’s real, so I don’t know what we’re going to do just yet. The one thing I do know is that we’re going to take a trip somewhere fun to celebrate!”