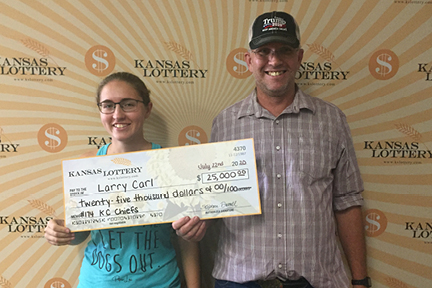 A Douglass man has won a $25,000 top prize in the Kansas Lottery’s “Kansas City Chiefs” instant ticket! Larry Carl had stopped in to a local Casey’s gas station on Monday morning and decided on a whim to purchase a single Kansas City Chiefs scratch ticket—even though he is a die-hard Dallas Cowboys fan.

“I don’t buy lottery tickets too often, but was waiting in line and thought I’d grab one while I was there,” said Carl. “I had to do a double take and reread the directions to make sure I had actually won!”

When Carl told his daughter he had won $25,000 on the scratch ticket, she thought it was a joke. “She kept thinking I was pranking her!” he laughed.

The huge win could not have come at a better time for Carl as he became unemployed in early June. He says this money will help tide him over until he can start working again in August.

“I am so thankful for this, and I plan to store it away for a rainy day,” Carl said before adding, “Although now, I will be looking for an even bigger win!”

While Carl is grateful for the significant amount of money from the Kansas City Chiefs ticket, he said he is still “bleeding blue” and will remain a loyal fan to the Dallas Cowboys.

The winning ticket was sold at Casey’s General Store #3758 at 103 South Highway 77 in Douglass, Kansas. There are still four top prizes in the Kansas City Chiefs instant scratch game, as well as thousands in other prizes!