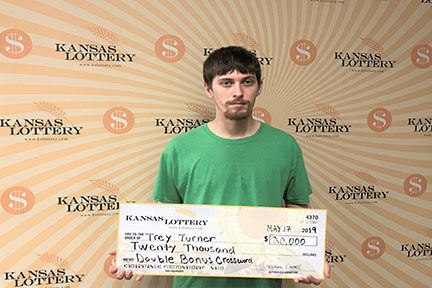 Playing crossword puzzles is something to do while passing the time for 27-year-old Trey Turner, which is why the Kansas Lottery’s Double Bonus Crossword instant scratch game caught his eye. The Fredonia man never imaged the game would land him $20,000!

“I just randomly bought two tickets. I haven’t bought any in a couple of months because I only buy maybe 10 to 15 a year,” Turner explained.

While scratching off the tickets, Turner said the first ticket was a non-winner, something he expected, but when he finished scratching the second ticket, he was speechless.

“I started counting the words up after I finished scratching all the letters off and I saw there were 10 words on there and I thought ‘holy crap,’” Turner explained.

Turner said he then double, triple, and even quadruple checked his ticket before it set in that he had actually won $20,000!

“I counted all the letters up and made sure the words and letters matched-up and then I called my dad to make sure I had actually won and had him look it,” Turner explained. “I had to make sure they didn’t sell me a fake ticket.”

Turner said he plans to spend some of the money on dental work and to fix up an old truck. He also plans on buying more scratch-off tickets with the hopes of winning bigger.

The winning ticket was sold at Casey’s General Store 1463 located at 101 N 10th Street in Fredonia. There are still 28 $20,000 top prizes, as well as thousands in other cash prizes left in the $2 Double Bonus Crossword instant scratch game.