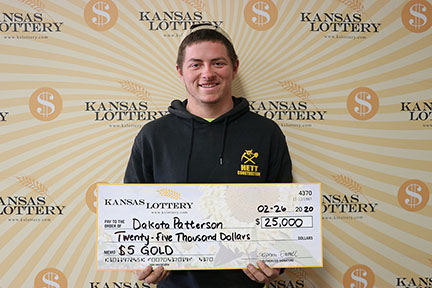 Dakota Patterson of Florence was hanging out with his coworkers before their shifts started when they decided to play some Kansas Lottery scratch tickets. That decision paid off for Patterson, who won $25,000 instantly on a $5 Gold scratch ticket!

“I don’t always buy tickets in the morning, but my coworkers do,” said Patterson. “For some reason I just decided I’d try my luck as well. I’m sure glad I did!”

Patterson bought two tickets, and scratched them off there in the store. The first ticket was not a winner, but the second one matched a winning number. The prize amount listed below was $25,000.

“I didn’t believe it at first, and neither did anyone else,” said Patterson with a laugh. “We all looked at it, and then everyone kind of started freaking out. I didn’t know what to do, but I knew I had to get it claimed in Topeka.”

He called his boss and asked if they could make it without him for the rest of the day because he won a big lottery prize. “To prove it, I texted my boss a picture of the ticket, and once he saw it he gave me the day off.” Patterson added.

The 20-year-old concrete worker isn’t quite sure what he’s going to do with the prize just yet. “I’m sure I’ll pay off some bills, and after that who knows,” said Patterson. “One thing’s for sure; I’m definitely going to keep playing!”

The winning ticket was sold at the Ampride on 512 East D Street in Hillsboro. There are still two top prizes left in the $5 Gold instant scratch game, as well as thousands in other cash prizes.