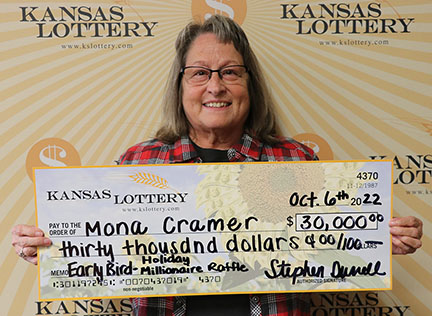 The Kansas Lottery’s annual Holiday Millionaire Raffle is in full swing, and while there are still a couple months to go until the Grand Finale drawing, there are already big winners claiming prizes!

Mona Cramer of Salina has been playing the Holiday Millionaire Raffle since it first started and has never won a prize in the game before. That all changed this past Sunday, when she realized she was the winner in the first of three $30,000 Early Bird drawings in the game! The winning ticket number of 051551.

“I typically buy one ticket a month during the raffle. I’ve done that since the beginning,” said Cramer. “But I decided to get one more ticket this time just before the cutoff so I could have two chances to win in the Early Bird drawing. And that ticket was the big winner!”

It was around 11:30 p.m. on Sunday night when Cramer checked the Kansas Lottery website to see the winning Early Bird number and was shocked that it appeared to match her number.

“The first thing I did was call my sister to tell her I think I had won, and I had her look online to make sure she was seeing the same thing,” Cramer said. “Eventually, I even called my other sister in California and had them check online as well to make sure I wasn’t imagining it!”

The win was made extra special for Cramer and her family, as it came on what would have been their father’s 97th birthday. “It couldn’t have come at a better time for me personally,” She added. “Now I can put some towards paying off my home, and also get a few medical procedures taken care of that I have delayed.”

The winning ticket was sold at Kwik Shop 739 at 1600 South 9th Street in Salina. There are still two $30,000 Early Bird drawings to come, November 6 December 4. The Grand Finale announcement will take place on Wednesday, January 4, 2023. For more information, see the Kansas Lottery website.