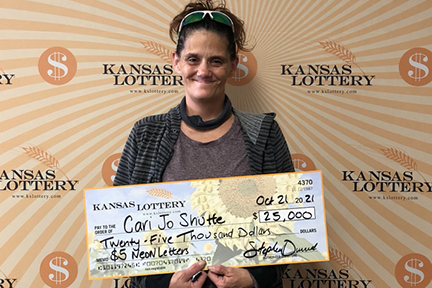 A Fredonia woman was in for a birthday surprise after purchasing four instant tickets, one of which won big money! Cari Jo Shutte buys about $10 worth of lottery tickets a week, which included two $5 Neon Letters tickets on her birthday and one of those won her a whopping $25,000!

“I had bought four tickets, two of which were Neon Letters, this time and took them home to scratch them off,” Shutte shared. “I always play the game and then scratch off the prize amount. On the last ticket, I had completed the word ‘frantic’ and scratched off the prize to see $25,000!”

Living in such a small town, Shutte still couldn’t believe she could be a big winner! She asked her husband to look over the ticket, and Shutte recalls him saying “there’s no way it won that much.”

The next morning, Shutte took the ticket to a retailer to check it, and when the clerk handed the ticket back to her and told her she’d have to claim it in Topeka, she knew she had won a huge prize! Shutte went home immediately to wake her husband up from his nap to tell him she really did have a top prize winner. He finally believed her after seeing the ticket checker receipt confirming she’d have to claim at the Kansas Lottery Headquarters.

Shutte says she promised her three children she would put some of the money toward taking them on a “little vacation” close to Christmas, perhaps somewhere warm and to visit family. She is also excited to pay off her debt and repay family from when they previously helped her out during a “tough time.”

The winning ticket was sold at Pete’s 47 at 2400 E. Washington in Fredonia. There are still two $25,000 top prizes left in the $5 Neon Letters instant scratch game, as well as thousands in other prizes!