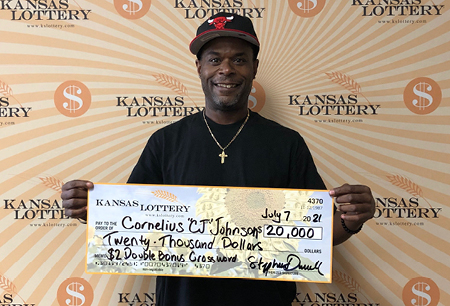 Cornelius “CJ” Johnson has a steadfast method of buying Kansas Lottery tickets: he always buys five $2 Double Bonus Crossword tickets and never veers from his approach. The dedication has now paid off for the Hutchinson man with a $20,000 top prize win!

Johnson purchases the Crossword tickets so he can unwind after working shifts as a chef at a local Hutchinson restaurant. “I’ve always been a literature, spelling kind of guy. The Crossword stimulates me mentally and I’ll usually have a few on hand to scratch after work. And I always buy five, same time and same place.”

He had held on to his five tickets for three days before scratching them at 1:30 a.m. after a shift. It was the last ticket Johnson played that had revealed 10 completed words to win the $20,000 top prize. “I took my dogs out to refresh my eyes and then recounted. And there it was—the same number of words!” he said.

Still dubious of his good luck, Johnson had a friend and his daughter double check the ticket for him, and sure enough, he was right!

The Hutchinson man hopes the win will help him expand his business—a local catering company, Suthern Comfort, which specializes in BBQ but has several different offerings. Johnson also plans to send some of the winnings to his mother.

The winning ticket was sold at Yesway Store 1044 at 901 E. 11th Ave. in Hutchinson. There are still 26 $20,000 top prizes left in the $2 Double Bonus Crossword instant scratch game, as well as thousands in other prizes!