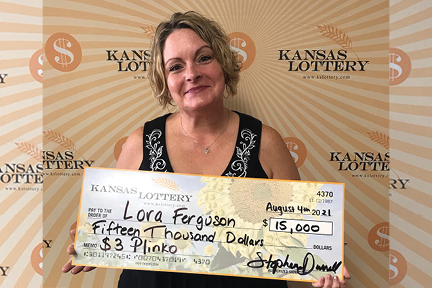 A Kansas City, Kan., woman has claimed the first top prize on the Kansas Lottery’s $3 Plinko ticket! Lora Ferguson routinely purchases up to four tickets at the same gas station a few times a week. This time, she decided to purchase a single Plinko ticket, which ended up winning her $15,000!

“I was having a rough day, because I’m a full-time investigator during the day and a part-time caretaker for my mom at night, so I stopped at my usual place to grab a bite to eat and a drink,” Ferguson said. “Then spur of the moment, I told the clerk to give me one Plinko ticket.”

Ferguson made it all the way to her work’s parking lot before scratching it, and saw a line cleared all the way down to the top prize! In shock from her win, she checked and rechecked the ticket, and came up with the same result.

“I went inside and two of my coworkers were there and they said I had a look on my face. And I just immediately broke down because I was having that type of day. I told them ‘I’ve been blessed with $15,000!’” she recalled.

The win is a huge blessing for the Kansas City woman, who is a single mom of four and has seven grandkids, in addition to being her mother’s caretaker. Ferguson says that while she could spend the money to pay off her vehicle, she wants to give her family the trip of a lifetime.

“I’m going to take my grandbabies to Disney World in the spring! I enjoy family, so I want to spend it on family. I do plan to buy myself a king-sized platform bed though, but that’s really the only thing I want for myself,” she added.

The winning ticket was sold at 7-Eleven 13245E at 2500 Central Ave. in Kansas City. There are still four $15,000 top prizes left in the $3 Plinko instant scratch game, as well as thousands in other prizes!