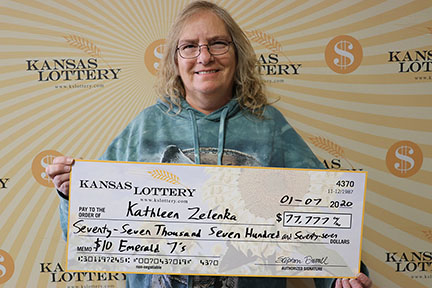 Kathleen Zelenka of Wilson enjoys playing the Kansas Lottery and has been chasing a big prize. Her determination paid off recently with a $77,777 win on the Emerald 7’s instant scratch game!

“I like to play scratch tickets, and I especially liked the Emerald 7’s game,” said Zelenka. “The bonus spots on top of the ticket gave you extra chances to win. I like those kinds of games!”

Zelenka was waiting on a lunch order, so she decided to play some lottery to pass the time.

“I bought a $20 ticket and two $10 tickets, and took them back to my car. I only played the $20 game, though, and then my lunch order was ready. So I grabbed my lunch and took everything home,” she said. “When I finally scratched off the winning ticket, I just kind of stared at it for a moment. Finally I called my husband and told him to hurry up and get home!”

“We took the ticket back to a store to check it to make sure we weren’t crazy,” Zelenka said with a laugh. “When the machine said we had to take the ticket to Topeka to claim it, that’s when we definitely knew.”

Zelenka says she already has plans for her winnings. “We’re going to pay off some credit cards, pay off a vehicle, and we’ll put some away for our grandchildren,” she said. “The rest will go into savings for us. It’s going to help us out in a big way!”

The winning ticket was sold at Casey’s General Store 1905 on 1315 10th Street in Great Bend. There are no top prizes left in the $10 Emerald 7’s instant scratch game. That game will be ended, and players will have six months to claim any remaining prizes within the game.