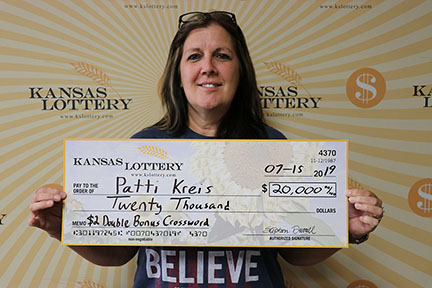 Restless isn’t the way most people would describe a beautiful summer weekend, however, that is exactly how Patti Kreis would describe this past weekend.

“I didn’t sleep great that night. I was too excited to relax. It didn’t feel real to me,” Kreis said with a laugh. “I kept re-checking the ticket just to make sure I wasn’t crazy.”

“I just kept finding letters and making complete words. When I got done, I counted nine complete words and my husband and I were so excited to win $2,000!”

“I just jumped up and hugged my husband,” Kreis said. “I’m still so excited! It’s all such a whirlwind.”

After days of waiting to claim her prize, Kreis says she can now start thinking about what to do with the winnings.

“I’ll probably pay off my debt and medical bills and the rest will go into savings for now.”

The winning ticket was sold at Yesway Store 1115 at 100 South Grand Street in Lyons. There are still 21 top prizes left in the $2 Double Bonus Crossword instant scratch game, as well as thousands in other prizes!