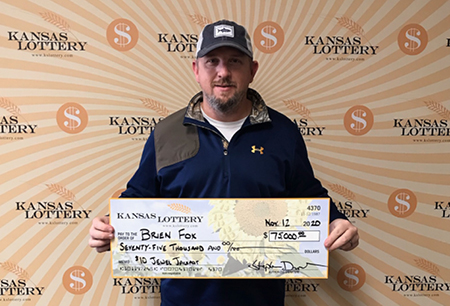 A Tennessee man has won a $75,000 top prize in the Kansas Lottery’s “Jewel Jackpot” instant game!

On his annual hunting trip to Kansas, Brien Fox stopped at a gas station in Garnett, Kansas, for a break. He had originally intended to purchase both a $5 and $10 “Holiday Lucky Times” ticket, but the retailer did not have any of the $10 ticket at the time. Instead, Fox decided on the $10 Jewel Jackpot ticket, a decision that made him $75,000 richer!

“I was pumping gas and started scratching the ticket,” Fox said. “It eventually showed three diamonds to win the $75,000!”

Fox texted his wife to tell her the big news. “She was just shocked! She really didn’t believe it was real until I scanned it in the gas station where it told me I had to take it to Topeka,” he joked.

Fox is ecstatic to finally pay off his student loans and put the remaining money into savings. “I won’t even know what it’s like to not have a payment on those anymore. Anyone else could have won, so I’m just very grateful,” he said.

The winning ticket was sold at Short Stop #20 at 120 S. Maple Street in Garnett, Kansas. There are still thousands in other prizes in the $10 Jewel Jackpot instant scratch game!