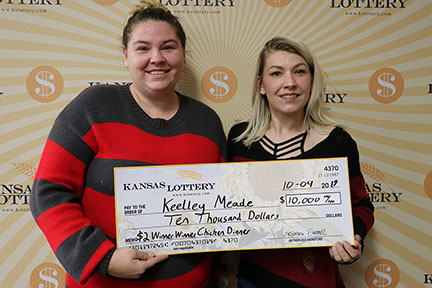 Keeley Meade of Melvern is celebrating a $10,000 win after playing the $2 Winner Winner Chicken Dinner instant scratch ticket! The win came as a big surprise to Meade, a mother of four.

“I really don’t play that often. When you have four kids it is hard to find the time to play,” said Meade. “I was at the gas station and I saw the Winner Winner Chicken Dinner ticket and it caught my eye, so I bought four of them.”

Her keen eye for poultry paid off when the second ticket she purchased was the big winner.

“I didn’t know what to do at first, I couldn’t believe my eyes,” Meade explained. “I called my mom and she didn’t believe me either, so I had to take a picture of the ticket and text it to her! After that I signed the ticket and put it in a safe spot.”

Meade says she doesn’t know what she’ll do with the money just yet. “I’m sure I’ll go shopping for clothes for all of us,” she added. “Then I’ll probably just pay some bills.”

The winning ticket was purchased at Fuel Expresso 11 at 2754 US Highway 75 NW in Lebo. Keeley is joined in the photo by her sister, Ashley Morgan, on the right.