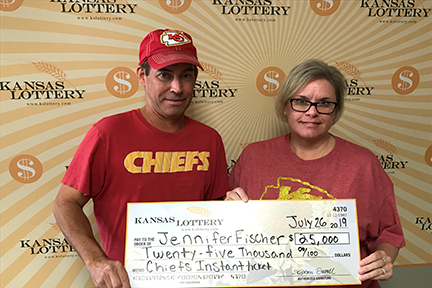 Some people say breakfast is the most important meal of the day, but for one Meade woman, skipping breakfast turned into a $25,000 win!

“It’s unbelievable,” said Jennifer Fischer, “I checked that ticket so many times!”

Fischer explained she and her husband go out for breakfast most Sunday mornings. However, when their regular breakfast spot was packed, they decided to drive down the street to buy sandwiches to take home.

“Normally after we go to breakfast, we go buy Lottery tickets,” she explained. “We already had $15 worth of tickets to cash in.”

The couple bought three tickets including one $5 Kansas City Chiefs instant scratch ticket. Once at home, Fischer said she forgot about the tickets until her husband asked if she had scratched the tickets off yet.

“I looked at the Chiefs ticket and took it over by the kitchen door for better light. I looked at the ticket again and said, ‘oh my God! oh my God!’ My husband asked ‘what?’ So, I handed him the ticket, shaking like a leaf, and said ‘look for number 39.’ He looked at it and said ‘that says $25,000!’ and I said ‘I know it does,’” Fischer explained with laughter. “It was a sheer shock!”

Fischer said the couple owns a food truck, so they plan to use part of their winnings to pay off their debt and then go to Las Vegas.

“I never imaged winning $25,000, and it’s very much appreciated,” Fischer said. Adding had their regular breakfast spot not been packed, she might not have won.

The winning ticket was sold at Love’s Country Store 116 at 115 N. Fowler St. in Meade. There are still four top prizes left in the $5 Kansas City Chiefs scratch game, as well as thousands in other prizes!