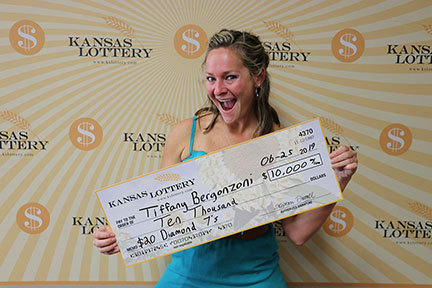 It was another typical Monday morning for Tiffany Bergonzoni as she sat at her kitchen table drinking her coffee and trying to prepare for another work week. To pass the time, she reached into her purse and pulled out the Kansas Lottery instant scratch ticket she bought the night before and started playing.

“I was sitting there with my coffee thinking ‘It sure would be nice to win the lottery right now'," Bergonzi said with a smile.

Daydreaming about winning the lottery turned into a reality when Bergonzoni realized she won $10,000 on the $20 Diamond 7’s instant scratch game.

“It was a crazy feeling” Bergonzoni exclaimed. “I play scratch tickets a few times a week, but I’ve never won anything like this before,” she added. “I only bought the one Diamond 7 ticket this time as well. It just goes to show that one is all you need!”

Bergonzoni said she plans to do the “sensible thing” with the winnings by paying off her debt.

“I’m still looking for that big-time win, so I’ll be back at the gas station soon, buying a few more tickets,” she added. “I plan on being back here again one day!”

The winning ticket was sold at Santa Fe Fuel at 1100 E Santa Fe Street in Olathe. There are still two top prize left in the Diamond 7’s instant scratch game, as well as thousands of dollars in other cash prizes.