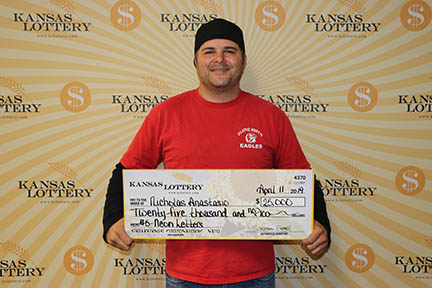 A couple of weeks ago, Nicholas Anastasio purchased a Kansas Lottery $5 Neon Letters instant scratch ticket, but didn’t have time to play the game so he put it in the console of his car.  Two weeks later when the Olathe resident was cleaning out his car, he found the unscratched ticket and scratched his way to winning a $25,000 top prize!

“I can’t believe I had that ticket in my console for two weeks!” said Anastasio. “I feel so blessed. I only buy scratch tickets every now and then.  I usually just stick to playing Super Kansas Cash because I’ve had a lot of luck with that game.  Maybe I should start buying scratch ticket more often?”

Before making the trip to the Lottery offices in Topeka, the lucky winner stopped at a convenience store to have the winning ticket checked.

“When I scanned the ticket myself, the Ticket Checker said I had to claim my prize in Topeka, but it didn’t show the amount I’d won,” said Anastasio.  “I asked a store clerk to check it and he said the ticket was worth more than they could pay out.  The clerk and I went over my ticket again and when the he verified I had played the game right, I knew I had definitely won $25,000.”

While making his way to Topeka to claim his top prize, Anastasio called his wife to share the good news.

“My wife didn’t believe me at first,” said Anastasio.  “I was so emotional I was crying.  This win came at a good time.  God is good and I’m very blessed.”

The winning ticket was purchased at 7-Eleven, located at 2151 E. 151st St. in Olathe.  There are three remaining $25,000 top prizes in the Neon Letters games as well as thousands of other cash prizes.