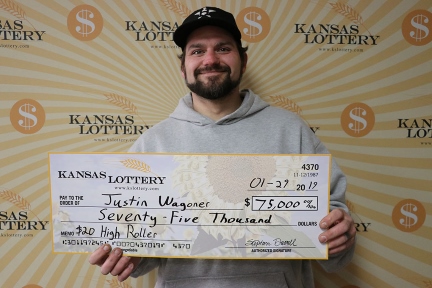 Justin Wagoner of Overland Park is feeling extra lucky after winning $75,000 on a $20 High Roller instant ticket with the Kansas Lottery. The win "couldn't have come at a better time," said Wagoner.

"I've just recently started a new business and it's been a tough stretch. This is such an amazing blessing for me. I plan to put the winnings into my company and it will pretty much pull me out of a rough situation," Wagoner said. "I still can't believe my luck."

Wagoner had already been a winner with the High Roller ticket before his top prize win. "I won $1,000 playing the game a few weeks ago, so it felt like a lucky game for me. I bought five tickets on Sunday afternoon and took them home without scratching them," said Wagoner. "I kind of forgot about them until I was leaving, and I didn't have time to scratch all of them off before leaving the house."

Wagoner was able to scratch off four of the five tickets before stopping at a convenience store to check them. "The first four weren't winners so I was kind of frustrated. I just scratched off the barcode on the last one and scanned it, and then the ticket checker said to sign the back of the ticket. That's when I got excited."

"The clerk helped me figure out how much I had won and then gave me the form that printed out. I was in shock. I'm still kind of in shock! I couldn't sleep last night, so I just kept the ticket in my pocket until I got here to claim my prize," said Wagoner.

The winning ticket was sold at Metcalf 66 at 13620 Metcalf Avenue in Overland Park. There are still three top prizes left in the $20 High Roller instant scratch game, as well as thousands in other cash prizes.