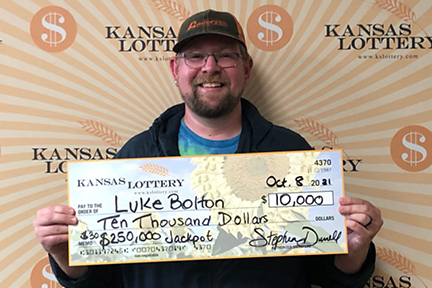 Luke Bolton of Pittsburg had just finished purchasing some home supplies when he stopped into the local station to buy some drinks and snacks for his family as promised. While there, he purchased one $30 $250,000 Jackpot scratch ticket, on which he won the second-tier prize of $10,000!

“I bought just one of the $30 tickets and then also purchased some smaller tickets, which I waited to scratch until I was home,” Bolton said. “And I almost always wait to play them until late at night when everyone is in bed.”

The Pittsburg man had scratched all of the numbers off of the ticket first to see if any had matched. Spying a 10X multiplier symbol, he began to reveal the $1,000 prize underneath. “That’s when I realized I won $10,000! I was excited, but it was late and I didn’t think $10,000 was still worth waking my wife up to tell her,” he laughed.

Bolton shared the win with his wife and other family members the next day. When the winner shared his good news with the rest of the family via a group text, Bolton’s oldest brother—who also often tries his luck on Kansas Lottery tickets—had to confirm the ticket was real before everyone would believe Bolton was $10,000 richer!

The win comes right before Bolton celebrated his birthday, making the day all that more special. He plans to save some of the funds, but also put some toward remodeling his home’s basement for a family area.

The winning ticket was sold at Pete’s 4 at 5005 Parkview Dr. in Frontenac. There is still one top prize and five second-tier prizes left in the $30 $250,000 Jackpot game, plus thousands in other prizes!