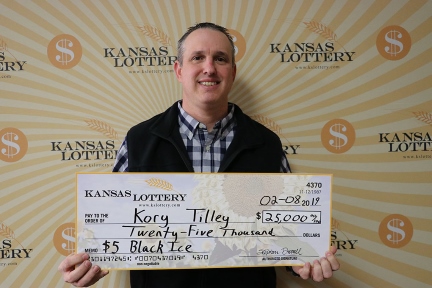 Every Kansan knows to keep an eye out for black ice during the winter. Kory Tilley of Rose Hill spotted a $5 "Black Ice" instant scratch ticket while in line at a convenience store and decided to try his luck. His keen vision paid off to the tune of $25,000!

"I really don't play that often and when I do, I only play $1 or $2 tickets," said Tilley. "I saw the Black Ice ticket in the dispenser and just decided to try it on a whim. It's actually the first $5 ticket I've ever bought!"

"I was putting gas into my vehicle and started scratching the ticket off while waiting. I didn't realize what I had won at first, but once it finally clicked that I had won, I just started laughing. I couldn't believe it!" said Tilley.

Most people come in as quick as they can to claim their prize, but not Tilley. "I won last Friday and decided I would wait until this week to come and claim the ticket because of work obligations. I just signed the ticket and put it in a safe place in the meantime," he said.

Tilley said he isn't sure what he's going to spend the money on. "I have a daughter getting married in April, but that's mostly paid for already. We'll probably just put it into savings for now. Maybe we'll plan a vacation for the future!"

The winning ticket was sold at Casey's General Store 3454 at 2036 N. Andover Road in Andover. There is still one $25,000 top prize left in the $5 Black Ice instant scratch game, as well as thousands in other cash prizes.