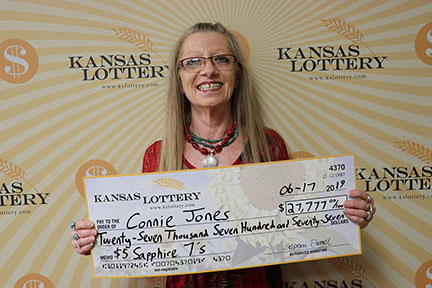 The sound of ocean waves crashing on the beach is a sound Connie Jones has never heard before in-person, but thanks to a $5 Sapphire 7’s instant scratch ticket and a $27,777 win, a trip to the ocean is something the Mitchell County resident can now cross off her bucket list.

Jones said she doesn’t buy $5 scratch tickets often, but something about the Sapphire 7’s instant ticket caught her eye.

“My husband and I were driving back home from Wichita last Thursday when we stopped to get gas and I went inside to get some things,” Jones said. “When I was checking out, I noticed the Sapphire 7’s ticket. I decided I wanted to play it so I bought just one ticket.”

Jones added she didn’t scratch the ticket off until Sunday afternoon.

“I got about halfway down the ticket when I matched three gold bars in a row and it said that was a top prize winner,” Jones eagerly described. “I couldn’t believe it. I started screaming and it scared my husband and son who came running into the room to check on me! Once they saw the ticket, they got excited with me.”

Jones plans on using the winnings to pay off some medical debt and take a long overdue vacation with her husband.

“We celebrated our 40th wedding anniversary in May, and I think that we might go on a trip. I’ve never seen the ocean, and I think I’d like to make that happen now. Or maybe go to Las Vegas and see some shows,” Jones added with a smile. “Whatever we end up doing, I’m excited for it!”

The winning ticket was sold at the Circle K Store 2721644 located at 6115 N. Air Cap Drive in Park City. There are still three top prizes left in the $5 Sapphire 7’s instant scratch game, as well as thousands in other cash prizes.