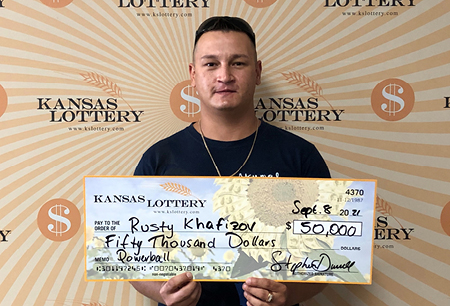 It’s been less than one month since Rusty Khafizov came back to the United States after travelling around Europe for six months, and his luck has already brought him a $50,000 Powerball prize! The Shawnee man won the prize by matching four numbers and the Powerball. The winning numbers on September 4 were 32 – 35 – 40 – 52 – 54 Powerball 1.

Khafizov, a construction worker, purchases a single line of Quick Pick Powerball numbers every so often at whatever gas station he’s closest to. “I just spent all this money on my trip, and came back and started working again. I saw that the jackpot was getting high, so thought I might as well!”

Not knowing if any of his lottery tickets were winners, Khafizov took a stack to a local gas station to check what he might have won. When the winning ticket told him to claim at Lottery Headquarters, he finally looked up the winning numbers online and saw he matched enough numbers to nab a $50,000 win!

“The most I’ve ever won was $400 earlier this year, but I’ve never really had any luck with any raffles or anything like that. So this is the first time I’ve won anything near this big!” the winner added.

Khafizov plans to use the money to expand his small business—Level Up Concrete LLC—as well as put some toward a down payment on a house when the time is right.