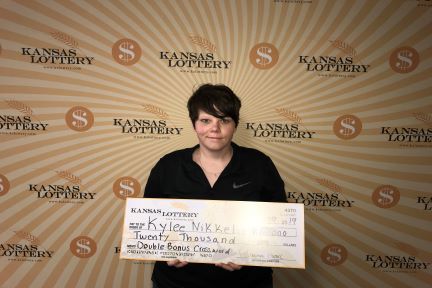 A trip to the store for ice cream turned into a $20,000 win for one Washington woman and her family.

Nikkel explained she and her wife took their son out for ice cream one Saturday night and while they were at the convenience store, the couple decided to buy a few $2 Double Bonus Crossword scratch tickets.

“We always get the crosswords because they’re fun and it takes time, it’s not just one scratch and you’re done,” she said.

Nikkel explained after her wife’s ticket was a non-winner she started scratching her ticket adding with each scratch a new word was revealed.

In disbelief, the couple went back to the store to double-check the ticket.

“It said you have to go to Topeka to claim the winnings,” Nikkel said. “When we got home we said ‘let’s double-check this ticket again,’ and we then realized I missed a “T” and that’s when we really started freaking out because we realized we had actually won $20,000!”

Nikkel said the couple plans to pay off their debt with the winnings and invest the rest.

The winning ticket was sold at Short Stop 25 located at 200 E. 7th St. in Washington. There are still 14 top prizes left in the $2 Double Bonus Crossword scratch game, as well as thousands in other prizes!