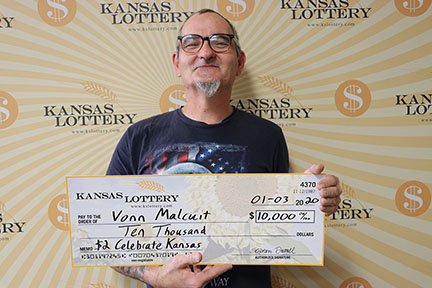 Vonn Malcuit of Concordia was already a big fan of the $2 Celebrate Kansas ticket because of the extended play style. Now he has even more reasons to celebrate after his $10,000 top prize win!

“I was at the store and was going to play some crossword games, but instead decided to try my luck on the Celebrate Kansas tickets,” said Malcuit. “I thought the ticket looked fun, since it was covered in balloons. It reminded me of the balloon pop game at the state fair!”

Malcuit took the ticket home to play. He was sitting at the kitchen table when he started counting symbols and that’s when he realized he had a special ticket.

“I kept counting over and over again,” Malcuit said. “Finally I took it back to the store and checked it there, and they said I was going to have to claim it in Topeka and they gave me a claim form. That’s when I knew it was the real deal!”

Even sitting in the Kansas Lottery office, Malcuit was still in disbelief. “I feel like someone is going to pinch me and I’m going to wake up,” he said with a smile. “But here I am with this big check, so it must be real!”

Malcuit says he plans to use the money to pay off some bills and will put the rest into his savings.

The winning ticket was purchased at Woods Mini Mart 27 on 203 6th Street in Concordia. There are no top prizes left in the $2 Celebrate Kansas instant scratch game. The game will end, and players will have six months from the end date to claim any remaining prizes.